With the closure of Long Lake Road, a "Road Closed" sign has been placed near the church. Our main entrance is open.

The music program plays an integral role in worship at Kirk in the Hills. The organ voluntaries, congregational hymns, choir anthems and responses, vocal solos, and instrumental music are all essential components of our services. Sacred music, combined with the Proclamation of the Word and the Celebration of the Sacraments, brings us to a deeper understanding of our faith. Here at the Kirk, we sing glad praises to the God in whom we live and breathe and have our being.

The choirs form the backbone of our music ministry, and there are many ways to become involved. The choir season runs from the week following Labor Day through late May for all choirs except for the Chancel Choir, whose season concludes in June. For those who love to sing, consider joining one of our choirs--if choir participation is not for you, then we welcome your enthusiastic participation in the pews. For those who play an instrument, we hope you will consider offering your gifts of music in worship.

The youth choirs are affiliated with the Royal School of Church Music, an international organization of choirmasters, choirs, cathedrals, and churches, and are under the direction of Nicole Joseph, Associate Director of Music. Our young choristers train under the RSCM's acclaimed Voice for Life program.

Concerts and other special events throughout the year are offered to the community as we seek to welcome all to the Kirk.

For information about participation in any of the music department's offerings, contact Marilyn Biery, Bridge Director of Music Ministry at (248)-973-8004 or

Sing for joy to God our strength! 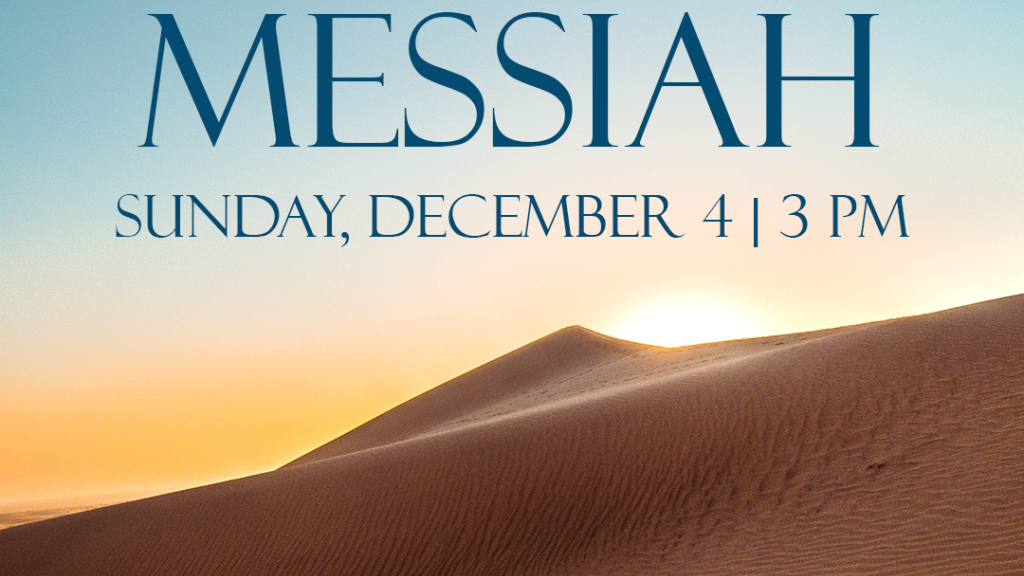 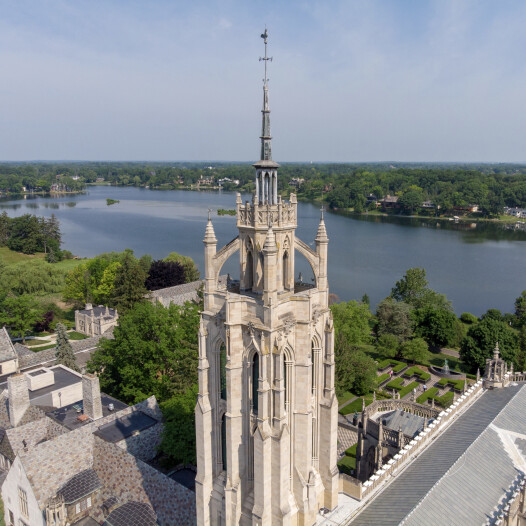 High in the Kirk tower is the 77-bell carillon, the world's largest in number of bells (tied with our sister tower, Hyechon College in Korea). The carillon was cast by the 300 year-old royal bellfoundry of Petit and Fritsen, The Netherlands. The instrument was the gift of the Fruehauf family, designed by Dr. Frederick L. Marriott, longtime Kirk organist and carillonneur, and installed in 1960.
The largest bell, the Bourdon, is 6' 10" in diameter and weighs over six tons, and the smallest is only 6" in diameter and weighs fourteen pounds. While thirty-six of the bells may be played electrically (and therefore without dynamic nuance) from the sanctuary organ console, the full 77 bell compass is playable only (with dynamic nuance) from a mechanical keyboard called a clavier, located in a cabin in the belfry. Five of the large bells (G, B, D, E and G) form a peal which swing freely; these five also sound in combination each quarter hour as directed by the instrument's computerized clock mechanism. 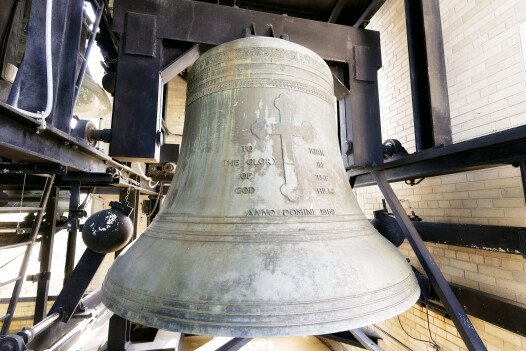 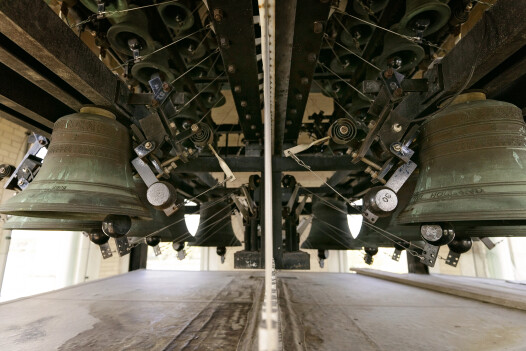 Midway up the tower is the Marriott Library, which serves as both a repository of Dr. Marriott's music library and his many compositions (including his works for carillon) as well as the home to a practice clavier of the same design as the carillon's clavier.

The instrument is normally played each Sunday before worship, for recitals on Sundays after worship (during the Summer Carillon Series featuring carillonneurs from around the world), before other concerts during the year, and frequently for weddings. Due to COVID-19, the building has been closed, but when the church re-opens to the public, tours of the tower can be scheduled by calling (248) 973-8018. 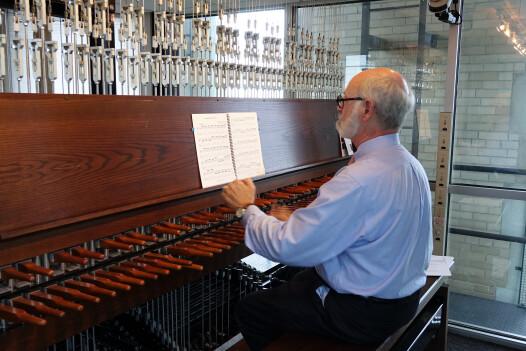 Dennis Curry, Kirk Carillonneur, who was the last student in Dr. Marriott’s long teaching career, has served faithfully as our carillonneur for thirty years. For half the length of the carillon’s existence, Dennis Curry has been climbing her stairs and bringing her to life.

He has pealed countless newlyweds out into their marriages, loved ones off to their burial grounds, and Sunday morning worshipers into their cars and out on to Long Lake Road. On Christmas Eve and Easter, he hustles up step by step after our many services to let the whole community know, “God is With Us” and “He is Risen.”

This November, Kirk in the Hills will celebrate its 75th anniversary, and would like to have some new carillon compositions and arrangements to celebrate the occasion. Three awards will be given – $750, $500, $250 – all pieces will be premiered on November 20. Thematic inspiration should be drawn from Scottish heritage. Questions can be directed to Deadline is November 5.

HYMN PRELUDES FOR THE KIRK

Hymn Preludes for the Kirk

Youth Choirs will begin in September, click the button below to learn more! 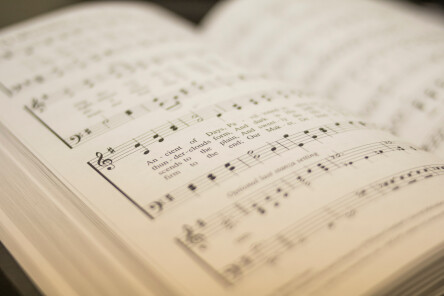 The Chancel Choir is comprised of professional and auditioned volunteer singers, and sings during Sunday worship services in the sanctuary throughout the entire calendar year as well as for special seasonal services and concerts.

We are currently hiring Chancel Choir members, click here for more information. For information about auditions, please contact Marilyn Biery at  or 248-973-8004. 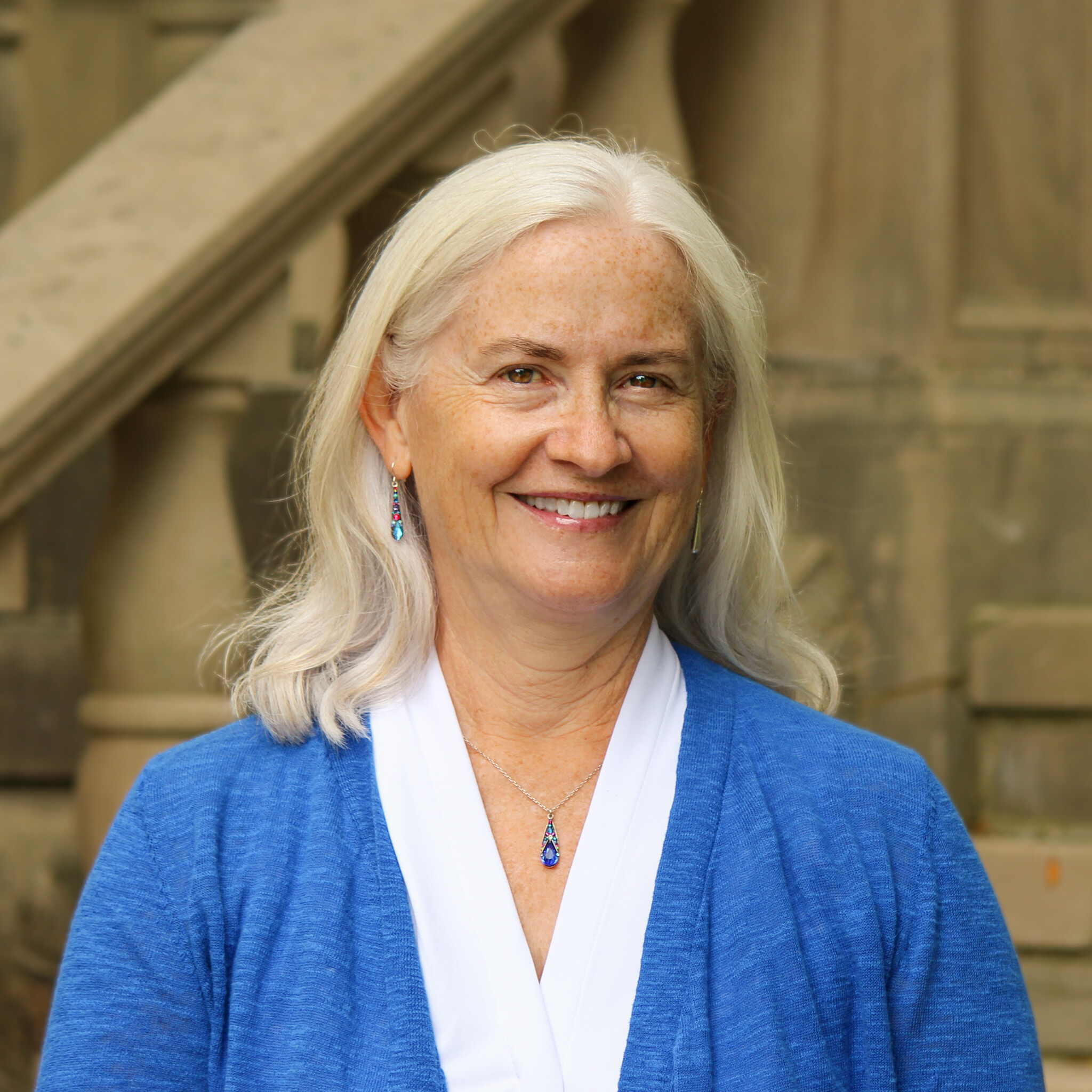 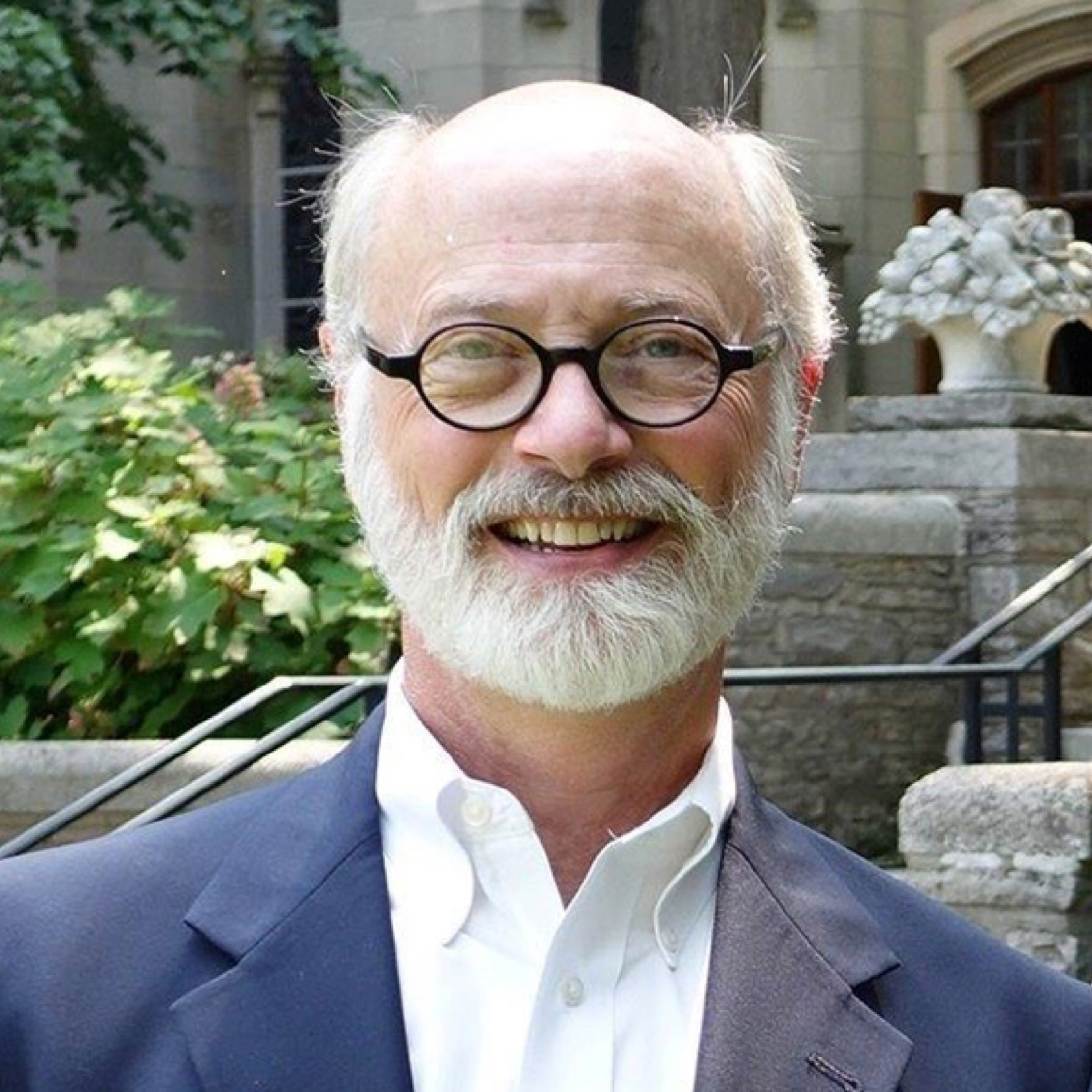 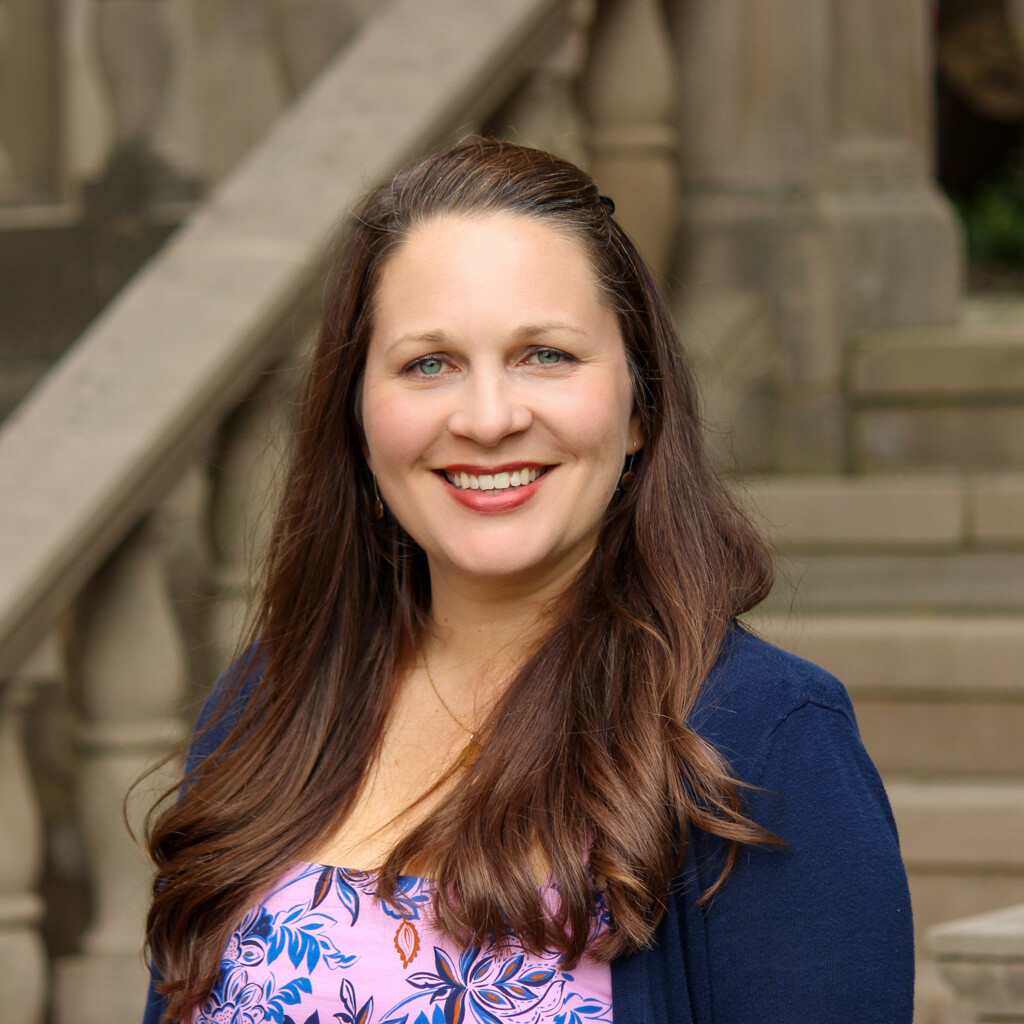 Special Music Curator and Assistant for the Youth Choirs 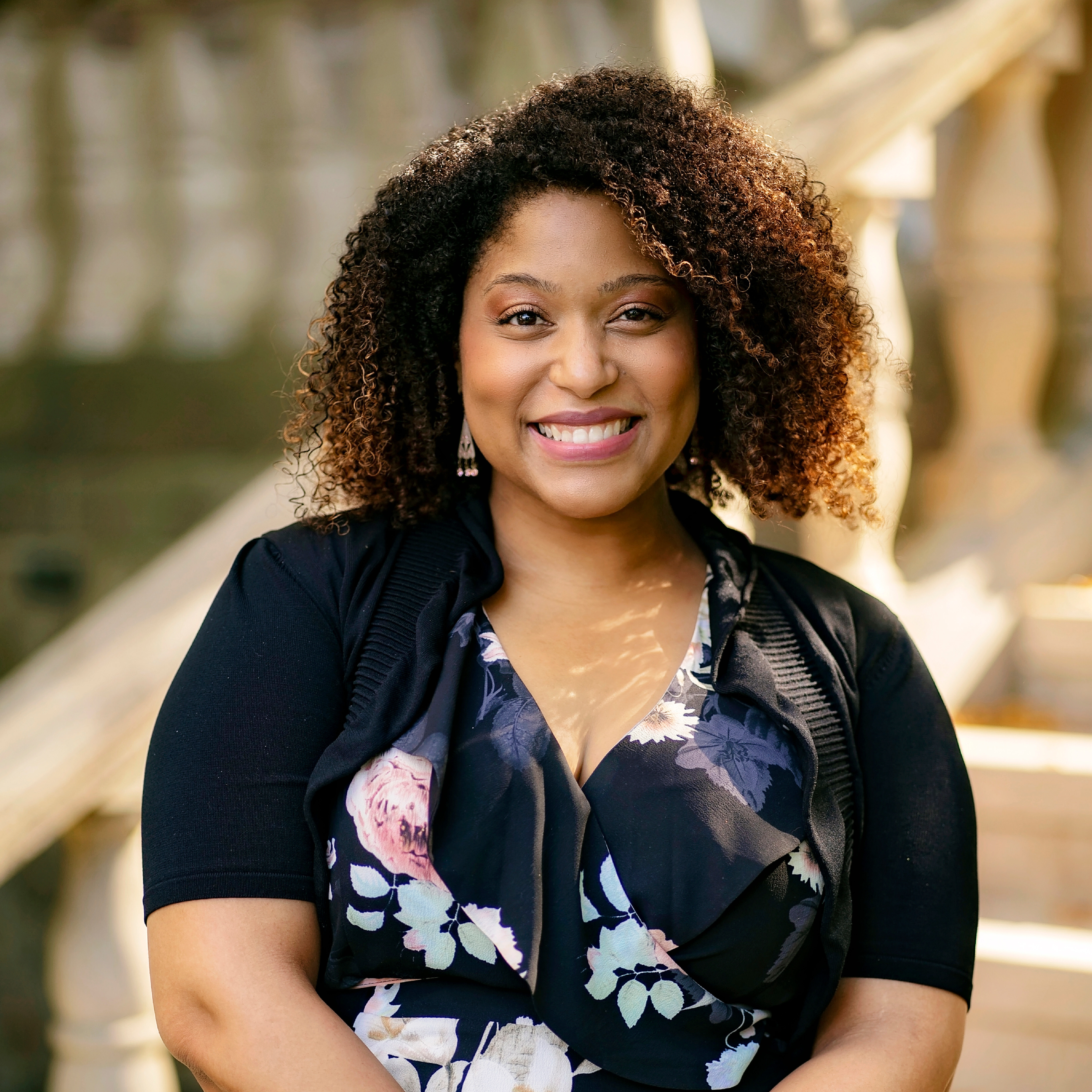